The abduction of protestors that’s happened in Portland OR is now in Columbus OH. I assume it’s possible in Louisville now, or will be soon.

The unidentified Federal staff with the unmarked vans are maybe BORTAC, Customs’ border tactical units under the command of DHS Special Operations Group. There also are Department of Homeland Security “rapid deployment teams” made up of officers from Customs and Border Protection, the Transportation Security Administration, the Coast Guard, and Immigration and Customs Enforcement (who back up the Federal Protective Service).

I have strong feelings about what this means for organizing right now. Trying to hold a particular space – Injustice Square or any particular park or sidewalk – attracts people who are vulnerable, makes people easy to snatch up, and makes it difficult if not impossible to provide jail support for anyone abducted.

Because people come and go from these spaces on barely a first name basis, organizers often don’t have the info they will need to arrange jail support (whatever kinds of jail support will even be possible in this scenario). “They drug that guy off… don’t know who he was.” is not an enviable position from which to try to provide support to someone you’ve just seen abducted.

I also don’t think we can generalize from the stories and outcomes of recent protestor arrests to imagine what will happen in the case of these Federal arrests and detentions, when people are getting snatched up as domestic terrorists. The laws aren’t the same, and the charges and conditions of detention certainly won’t be.

More than the heightened risk to individual activists, holding a space also shifts the conversation from Black lives & the urgent need for justice, to a convo about what is the appropriate reach and role of government vs. overreach… in other words, white people talking about themselves and how they feel about white authority and what they want that white authority to do for them. In this conversation, M4BL activists are placed in the role of troublesome disruptors and why we disrupt drops out entirely; it’s irrelevant to the conversation the Trumpies want us all to stay busy having. (Trumpies are really, really good at hijacking the important moments and conversations about justice.) 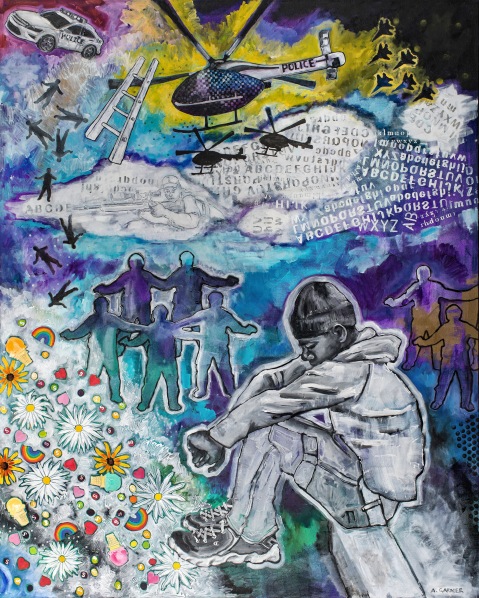 As someone in this to improve resources, opportunities and outcomes across the board for Black people particularly in Louisville, I am not interested in the conversation about government power or organizing against it per se. It’s a potent distraction. The actual conversation here is addressed very well by ACLU Kentucky.

Let’s not be all distracted and horrified about what Trump, federal and state authority can and can’t do! Let’s not. Organize to defeat him in the next election. Protest action must stay focused on justice for Black lives.